Could You Be Responsible for Your Parents’ Nursing Home Bills?

In 26 states (and Puerto Rico), laws generally hold children financially responsible for certain debts of their parents. These laws are referred to as filial responsibility laws (or filial support or filial piety laws).

The details of filial responsibility laws vary by state. Most require that a parent must be deemed unable to pay for the costs of basic care and support before a child may be held responsible. And most states consider the child’s ability to pay before holding the child liable for the cost of a parent’s health care. 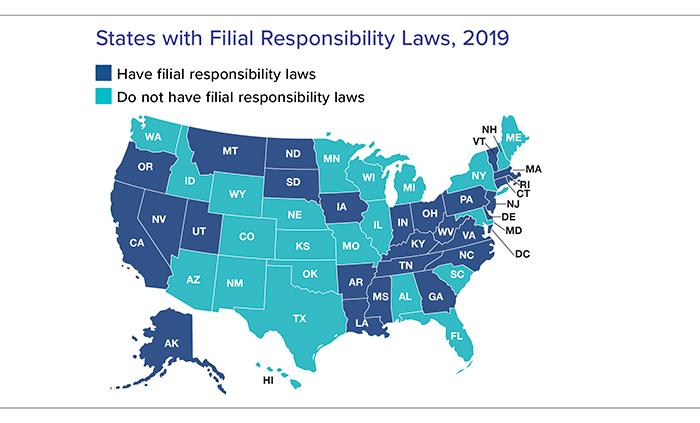 Filial responsibility laws are generally not enforced. But one 2012 case out of Pennsylvania may provide an example of how these laws might be used. Health Care & Retirement Corporation of America v. Pittas addressed the question of whether a child can be held responsible for the health-related debts of a parent.

The court found an adult son responsible for $93,000 in nursing home costs incurred by his mother. The court also ruled that there was no duty to consider the parent’s other possible financial resources for payment, which included her husband and two other adult children, or the fact that an application for Medicaid assistance was pending at the time of the claim against the child. The court found that the plaintiff had met its burden under the law by proving the child had the financial means to pay the outstanding bill.

As the Pennsylvania case illustrates, filial responsibility laws may come into play in situations when a parent incurs expenses for long-term care and lacks the financial means to pay them. This is not an issue when someone becomes eligible for Medicaid, because Medicaid pays for most long-term care services and does not require the recipient’s children to contribute funds toward the parent’s care; later, funds can be recovered through the Medicaid estate recovery process. In addition, federal law bars a nursing home from requiring a third-party guarantee of payment as a condition for either admission (or expedited admission) or continued stay of a patient.

What happens when a person admitted to a skilled nursing facility doesn’t qualify for Medicaid but lacks the financial resources to pay the bill? For example, it’s not uncommon for aging parents to gift assets to their children in order to qualify for Medicaid.

Under current rules, there is a five-year look-back period from the time the application for Medicaid is made. Gifts made during this look-back period may disqualify an applicant from receiving benefits for a certain period, which could be up to several months. In Connecticut, for example, nursing homes have the right to pursue claims against children of patients who made disqualifying transfers of assets (gifts) within two years of applying for Medicaid benefits.

Even though filial responsibility laws haven’t been prevalent, soaring long-term care costs could continue to place a growing burden on Medicaid, pushing federal and/or state government budgets higher. More of the cost of health care could shift to patients and their families, giving nursing homes and other health-care providers more incentive to pursue claims against children for the unpaid costs of care provided to their parents.

In any case, filial responsibility laws provide yet another reason for families to plan for long-term care. Talk to a qualified attorney if you have concerns or need more information regarding your specific situation.

This information is not intended as tax, legal, investment, or retirement advice or recommendations, and it may not be relied on for the purpose of avoiding any federal tax penalties. You are encouraged to seek advice from an independent tax or legal professional. The content is derived from sources believed to be accurate. Neither the information presented nor any opinion expressed constitutes a solicitation for the purchase or sale of any security. This material was written and prepared by Broadridge Advisor Solutions. © 2020 Broadridge Investor Communication Solutions, Inc.